🛠 Did you ever want to make your own particle detector?
Here is your chance! Build this low-cost open hardware project, investigate natural radioactivity around you and become a true citizen scientist: https://t.co/IUWuZ1mQ74 pic.twitter.com/SFcfWp9jIq

Silicon detectors are widely used in particle and nuclear physics for measuring ionizing radiation. This Do-It-Yourself project was designed by Oliver Keller and allows making a low-cost particle detector from scratch using silicon photodiodes. It can distinguish different particle types (alpha particles and electrons) and measures their energy between 33 keV and 8 MeV. The detector must be shielded from light and is, therefore, best mounted inside your favorite candy tin box. The signal output can be directly connected with microphone or headset inputs of regular laptops and smartphones.

This project was designed as a citizen science tool for students and educators, allowing them the discovery of natural radioactivity in our environment and investigation of everyday-objects such as vintage glasses and old ceramics. Of course, the famous bananas and other food such as certain dietary table salts or nuts are interesting research objects. All those are slightly radioactive due to the naturally abundant potassium-40 isotope which makes even us humans a tiny little bit radioactive as well.

The DIY particle detector is open source science hardware, released under the CERN open hardware license. Construction details and software for undertaking measurements can be found on the corresponding project website. The circuit board and electronic parts (~20 EUR) can be easily procured via kitspace, an open hardware design repository. There are two versions of this detector, the electron-detector variant is suggested for electronic beginners. The measurment discussed below was taken with the more advanced alpha-spectrometer varant. The required circuit boards are the same for both variants, but some of the electronic parts differ.

In the corresponding scientific paper, the performance of this detector was characterized in several reference measurements and compared with simulations. It also covers further information on how semiconducting silicon diodes, that are originally intended for detecting light, can be repurposed to measure ionizing radiation and radioactivity.

Measurement of an old ceramic pendant

For the measurement shown below, an old ceramic pendant from the Majolika ceramics manufacture in Karlsruhe, Germany, was put right below the silicon detector. The energy spectrum shows a lot of electrons from beta decays as well as two characteristic alpha energy lines in the 3 to 4 MeV range.
By comparing this measurement with the energy spectrum from a small uranium stone (c.f. article, figure 9), it can be concluded that several higher energy alpha lines are missing. In particular, the two peaks of polonium isotopes on the very right are not present. This can be explained by the fact, that uranium-based ceramic paint, so-called uranium glaze, was typically produced from chemically purified uranium. Since this paint is only a few tenths of years old at most, only the topmost isotopes of the uranium decay chain appear in the paint. The radioactive isotopes from radium onwards in this chain, including polonium, would undergo several characteristic alpha decays that are not present in the diagram. From this measurement, we are able to confirm that this particular uranium paint was based on chemically processed uranium ore and does not contain the pure mineral with all its radioactive isotopes (since uranium minerals are billions of years old all of its possible isotopes must have been generated over time). 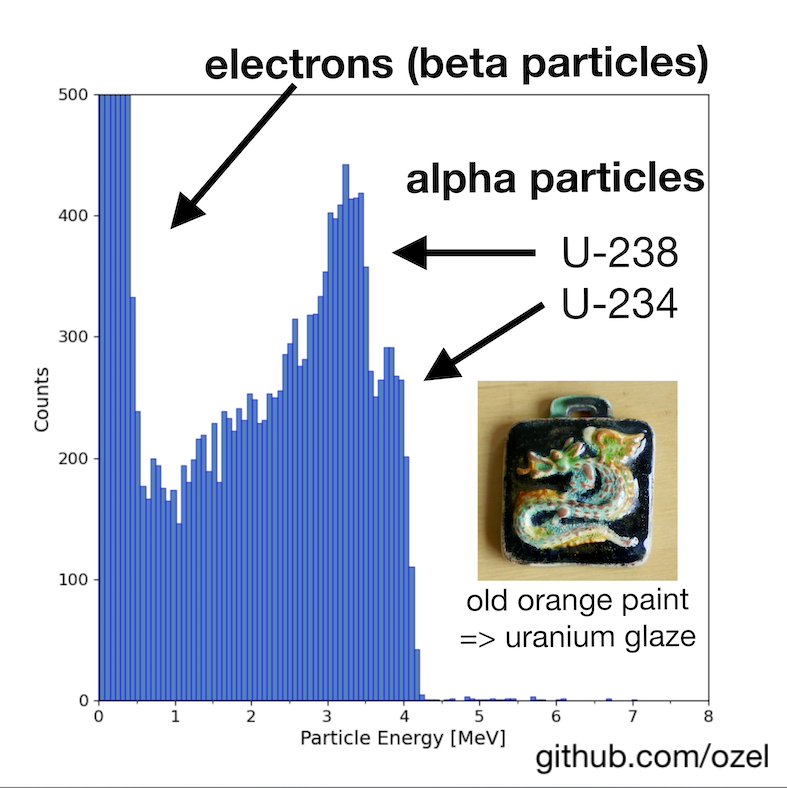 The measured alpha energy values are about 1 MeV lower than the actual characteristic alpha energies of the uranium isotopes due to properties of the source and the measurement setup: some energy is lost while the particle is interacting with the surface coating of the ceramic and some more is absorbed in the short air gap in front of the silicon detector (in this case about 2 mm).*

[*] In professional measurement setups, this can be improved by employing a vacuum chamber and pump in order to reduce the density of the surrounding air.