Matter occurs in different states: solid, liquid, gaseous and plasma. When external conditions (such as temperature or pressure) change, the state of matter might change as well. For example, a liquid such as water starts becoming a gas when it is heated to its boiling point or starts to freeze when it is cooled to its freezing point. A state of matter with very high energy is plasma. Here, some of the orbital electrons are not bound to atoms or molecules anymore. Hence, plasma is a gas of free electrons and ions.

Phase transitions often occur in nature, but they are also used in many technologies. In particular, several particle detectors rely on phase transitions. Furthermore, high-energy physics research can create an even more energetic state of matter, the so-called quark-gluon-plasma.

Therefore, high-energy physics provides a fruitful and exciting context to discuss states of matter and phase transitions with your students. Moreover, there are several fun experiments that allow students to study phenomena on their own. Below, we highlight some of our favourite experiments and explain how to link them to CERN physics and technologies. When using these experiments with students, make sure to let them predict the outcome of the experiment first, before conducting the experiment and observing the result. 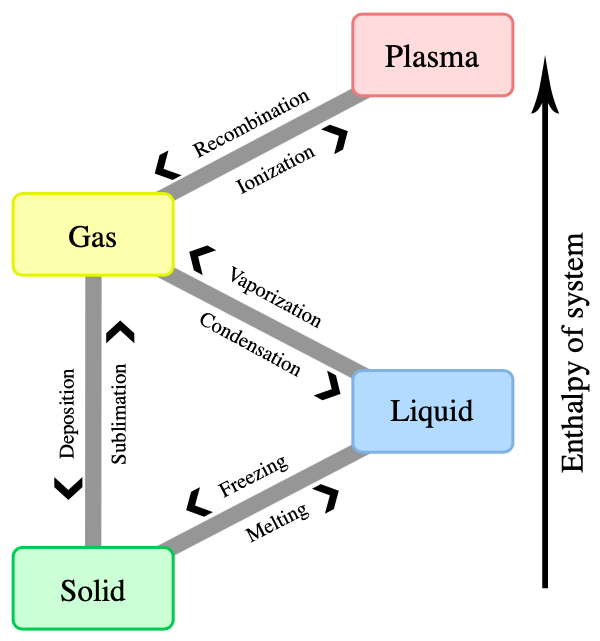 When you heat water up to its boiling point, bubbles of water vapour start to form as water changes from a liquid to a gaseous state. Similarly, when opening a bottle of sparkling water, bubbles start to form. Here, the decrease in pressure caused by opening the lid starts the vaporization process.

An interesting effect can be observed at surfaces that provide tiny impurities, for example, cellulose fibres inside a glass. These impurities provide starting points for bubbles to form, so-called nucleation sites. When pouring sparkling water into a glass, small amounts of gas get trapped inside or around small dust particles such as cellulose fibres.

A very similar principle forms the basis of the bubble chamber particle detection technique. Bubble chambers are filled with a superheated liquid, that basically really want to turn into a gas. Therefore, any small disturbance or impurity will start the bubble formation process inside a bubble chamber. Indeed, when ionizing particles fly through this superheated liquid, they will ionize the molecules on their way. These ions will then act as nucleating sites and bubbles will form around them. In this way, the track of an ionizing particle leaving a trail of ions can be visualized when taking photographs of the bubble trails at the right moment. (Find out more about bubble chambers here.)

Today, bubble chambers are no longer used for research at CERN. However, they have recently found a new role in dark matter research, for example, in the PICO project in Canada.

One of our favourite experiments is the ‘dancing raisins experiment” that allows students to study the role of nucleation sites in sparkling water.

Today, we are raising a raisin question. 🍇 + 🚰 = ❔ pic.twitter.com/2JygnRJjBK

When the internal energy of a substance increases, e.g. by applying heat or pressure, a solid will eventually become a liquid. For example, ice cubes or a wax candle start melting when applying heat, whereby the pressure remains constant. However, solids such as ice or wax differ in their melting points. Whereas ice melts at a temperature of about 0°C, wax melts at about 40°C. When a substance reaches its melting point, the temperature of the substance does not increase further even if constant heat is applied, as long as there is some solid left to melt. Thus, the applied heat for melting a solid is also referred to as latent heat. Only when all the solid turned into a liquid state does the temperature begin to rise again.

Among all the experiments in which students can study the melting process, making a cooling bath may be the coolest. All joking aside, it’s indeed really cool! In addition, cooling is essential for running the LHC. Check out CERN's cryogenics webpage for more information.

The minimum temperature of a regular ice-water-mixture is the melting point of ice at 0°C. You could use such a mixture as a cooling bath, e.g., for cooling a bottle of lemonade. However, there is one trick to make your cooling bath even cooler, i.e. to cool your lemonade more efficiently. The melting point of a substance such as ice can be depressed by adding a salt such as sodium chloride. Hence, an ice-water-salt-mixture ends up at a lower temperature than an ice-water-mixture. 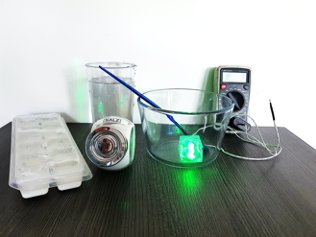 Do you like cold summer drinks? 🍹🏖
Today, we show you how to use supercool thermodynamics to create your own cryogenic system in your kitchen. pic.twitter.com/FJedCTv0HU

Another really cool experiment is to study how melting icebergs affect sea level or how melting ice cubes affect the level of your sugary summer drink.

Since salt (or sugar) water is denser than water, the buoyant force exerted on ice is bigger. Thus, ice cubes don’t sink as much in salt (or sugar) water as they would in water. Therefore, the level of the salt (or sugar) water rises, when the ice cubes melt, whereas it remains the same for water. This effect occurs, e.g. when the ice cubes in your sugary summer drink melt. Unfortunately, it also reinforces the negative effects of climate change: Icebergs are large chunks of ice that break off from glaciers (e.g. in Greenland). They are made of water, not salt water. Thus, sea level rises not only when icebergs drift into the sea, but also when they melt. However, the additional effect of the melting ice is comparatively small.* 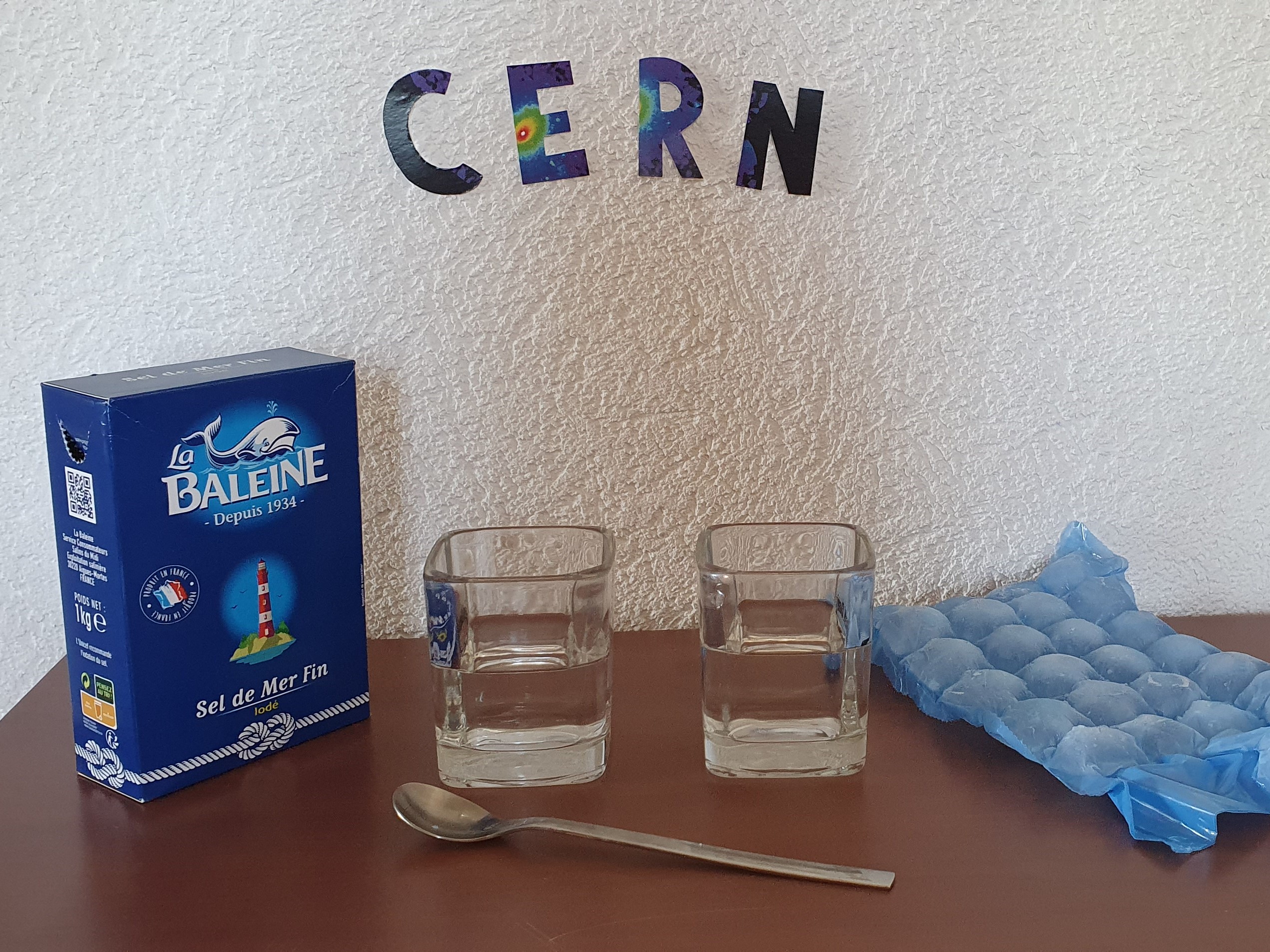 Did you know that CERN is engaged with the Sustainable Development Goals? Find out more about how CERN contributes to a better planet on the CERN knowledge transfer website.

The cloud chamber was one of the first particle detectors. Here, the most important aspect is a supercooled supersaturated alcohol vapour, which is essentially a very cold and very wet gas, that really wants to become a liquid. Indeed, any disturbance of this vapour might start the condensation process. When high-energy ionising particles fly through this vapour layer, they leave a trail of ions behind. These ions then trigger the condensation process acting as condensation nuclei. Therefore, the trail of ions turns into a trail of small drops that can be observed with your eyes or a camera under the right lighting conditions. This relatively easy principle allowed particle physicists to record particle tracks already 100 years ago.

Hands-on experimentation with condensation: cloud in a bottle

There are several experiments in which your students can study condensation. The cloud in a bottle experiment shows in an impressive way, how a rapid decrease in pressure can trigger the phase transition condensation. There are several videos and instructions on how to make a cloud a bottle online. Depending on the effort and equipment, the effect will be impressive to observe even as a demonstration or easy to do in a safe way as a hands-on experiment. Thus, we highlight our favourite two methods below. If you have access to dry ice, you can also let your students build their own cloud chamber using dry ice and isopropanol alcohol. 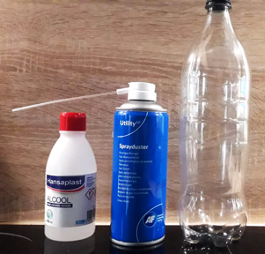 Annoyed by the 🌞 while you are stuck inside? Today, it’s your turn to make a ☁️ in your kitchen. pic.twitter.com/ttoBBNYxJq